Prior to the building’s conversion to art galleries in the early 1950s, SVAC’s Yester House was a private estate. Many of the rooms still contain architectural features that remind us of this history, such as fireplaces and linen closets. Dwell: Home Is Where the Art Is brings together four artists—Maxine Henryson, Alejandra Seeber, Ruth Shafer, and Suzanne Wright—who use this history as a jumping off point to explore themes of domesticity and interior spaces in their work.

Maxine Henryson lives and works in New York and Vermont. A photographer and bookmaker, her work is about place, geographic space, and the search for cultural interconnectivity. Her photographic practice draws from traditions including painting, film, performance, installation, and sculpture. Henryson’s photographs have been widely exhibited in the United States and Europe and are in numerous private and public collections. For more, visit her website or Instagram @maxinehenryson.

Alejandra Seeber has been described as having a dialogic approach to painting. She uses painting as a medium capable of absorbing other surrounding medias and influences. Home interiors were often the base of Seeber’s works. Currently she is more focused on space research, architecture, decoration, and small details, which she then stains, smears, and disperses, making the relationship between the inside and outside world diffuse. Born in Buenos Aires, Argentina, Seeber has been living in New York City since 1999 and has shown her work in solo and group shows nationally and internationally. Her work is featured on her website.

Ruth Shafer sculpts at the intersection of craft, domesticity, and feminism. By using secondhand fabrics, old furniture, and repurposed fluff, she employs familiarity as a medium, using the texture of old bed sheets or the curve of upholstery piping to evoke long-held associations with fiber and form. With humor and abstraction, Shafer wonders where the home ends and the body begins. She works from her home studio in Brattleboro, Vermont. For more, visit her website or Instagram @rruthshafrr.

Suzanne Wright has worked in mixed media for over 30 years, often combining several artforms or materials in one piece. Wright’s work seems to correspond to what she is reading, subjects she’s teaching, or events she’s living. She recently retired from teaching art near Philadelphia and is finally a full time artist and maker here in Vermont. Wright’s other work can be seen on Instagram @theWrights.

Cover image: In SVAC’s archives are the 1917 blueprints for Yester House, submitted by Murphy & Dana architects to Gertrude Ritter, the original owner, who later remarried and changed her surname to Webster. Photo by Abby Raeder. 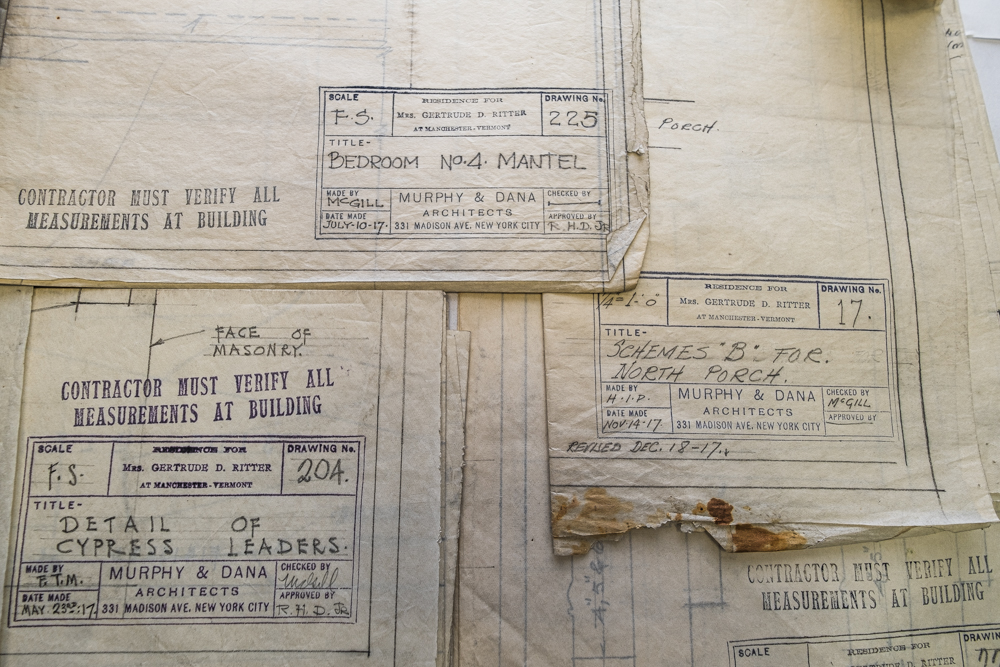